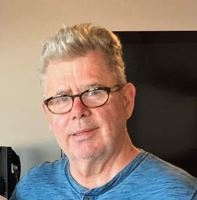 Donald Joseph O’Neill, age 59, died on November 14, 2022, after a long and courageous battle with mental illness. He was born on June 26, 1963, in Chatham, New Brunswick. Donnie was the son of Eva MacDonald and Joseph O’Neill.
Besides his parents, Donnie is survived by his son Alexander O’Neill (Annaliese Downey), former wife Barbara O’Neill, brother Peter (Sheila Melanson), sisters Sally Doyle (Steven), Mary O’Neill (Duncan Dee), Ann MacDonnell (Troy), and Jane O’Neill, and his nieces and nephews: Brian and Catherine Doyle; Connor and Maggie O’Neill Dee; Sarah and William Melanson-O’Neill; Jessie and Patrick MacDonnell; Sam, Audrey, and Bridget Gregan, Christina Birney, Jordan, Alexis, Briana, and Roxanne Melanson, Jocelyn Zaher, and Jared and Maggie Hughes.
Donnie was a gifted athlete, exceling especially in hockey and soccer. He was a proud Pulamoo, captaining both the hockey and soccer teams. He played hockey at St. F. X. University. To this day, his former teammates speak of Donnie’s natural leadership skills on and off the ice. He modeled his hockey playing after his favourite player, Bobby Orr.
Donnie had a wonderful sense of humour, but what he was most known for was his fierce loyalty to his family and friends along with his kind, generous heart. He gave everything of himself in hope of making this world just a little bit better for people. He volunteered with many organizations including the Knights of Columbus, Miramichi Folksong Festival, and the St. Mary’s bereavement committee.
His greatest pride was his son Alexander, and he would beam with joy when talking about him and his many accomplishments.
Visitation will be held on Friday, November 18, 2022, at Bell’s Funeral home in Miramichi, NB from 4:00 pm – 8:00 pm. Mass of Christian burial will be held at St. Mary’s Roman Catholic Church on Saturday, November 19 at 11:00 am.
The funeral service will be live streamed at the following link: https://vimeo.com/event/2622587
As expressions of sympathy, a memorial may be made to the Terry Fox Foundation or the Miramichi Foodbank. Funeral arrangements are under the care of Bell's Meadow’s Funeral Home, 651 King George Highway, Miramichi, NB. Telephone 506-622-3600.