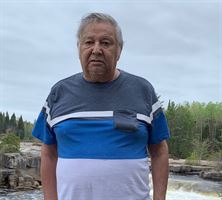 Gerald “Vincent” Cloud of Esgenoôpetitj, NB, husband of Freda (Joe) Cloud passed away at his residence on Thursday, October 20, 2022 at the age of 69. Born in Newcastle, NB, the son of the Late Noel Simon and Gertrude Barnaby.

Visitation will take place at Vincent’s residence, 51 Algonquin Road, Esgenoôpetitj on Monday, October 24 after 4:00 PM and again on Tuesday, October 25.

Mass of Christian Burial will be celebrated from St. Ann’s Catholic Church, Esgenoôpetitj on Wednesday, October 26, 2022 at 11:00 AM.

As expression of sympathy in Vincent’s memory, donations may be made to a charity of the donor’s choice. Messages of condolence for the family can be sent through the funeral home website at www.bellsmeadows.com