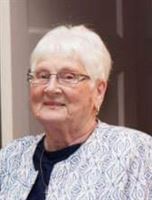 It is with great sadness that the family of Fabiola Elizabeth (Bodgie) Jardine announce her passing on January 8, 2022, at the age of 93 years.

Bodgie was born in Buffalo, New York on March 20, 1928. Her family later resided in Montreal, QC before returning to Nordin, New Brunswick.

She was the only daughter of Alexander (Sandy) Ryan and Bertha (Brune) Ryan. She is pre-deceased by her husband
William (Bill) Jardine, son of the late Claude and Francis (Maltby) Jardine; brothers Joseph (Sonny) Ryan and Thaddeus (Toodles) Ryan; sister-in-law Joan (Jardine) Tozer; son-in-law Don Green; and daughter-in-law Brenda Jardine.

During a trip to Europe in 1973, Bodgie noted that the weather in Germany, on June 5, was "sonny and warm". “Sonny”, spelled with an "o" (like her brother’s name). Some might think this was an error but to know Bodgie was to know that she was always thinking of others. It was common to have her call you by 2 or 3 names before she landed on the right one. She had so many people to love and was loved by so many.

Her kitchen calendar had every family member’s birthdate noted (all 8 children, 19 grandchildren and 27 great-grandchildren) and everyone received cards for their birthday. Her china cabinet had the most recent photos of her great grandchildren. The memo pad by the phone had the latest contact numbers, even the fridge was covered with mementos of her beloved family. Her home was filled with treasured family keepsakes. An embroidered family tree and a wooden plaque for each grandchild were cherished.

Bodgie was known by her many friends for her kindness, her stylish looks, her skill at the game of curling, and her love of bingo. Her characteristic Gaelic Gasp and “Holy Ol Sailors” were often heard.

Bodgie loved to feed people! Whether it was family meals, baking and sharing her famous scotch cookies or volunteering with “Meals on Wheels”, you never went hungry. An ice cream sandwich for breakfast was perfectly fine as long you were eating something.

Bodgie loved to be outdoors and shared her love of nature with her family. Whether it was cross country skiing at The Enclosure or swimming at Oak Point, her enthusiasm for the outdoors was infectious. She would often encourage her children to “Go outside and let the wind blow the stink off” as she understood the value of connecting with nature.

Bodgie loved animals! She had many cats and dogs through her life including 2 Golden Retrievers (both affectionately named Rafferty).

A parishioner of St. Mary's Roman Catholic Church, Fabiola was a spiritual woman of faith and was blessed with a beautiful and full life and will be dearly missed by all who knew her.

The family extends a heartfelt Thank you to the staff of the Northwest Wing at Bridgeview Hall for their love, compassion, and care.

In lieu of flowers, donations may be made to a charity of your choice. Messages of condolence for the family can be sent through the funeral home website at www.bellsmeadows.com

A tradition of service since 1922.