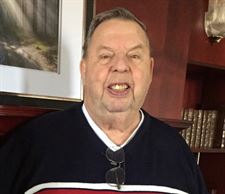 “It always works out in the end”
Leonce was born in Moncton, New Brunswick to the late Alban and Elizabeth (Bourque) Gallant and he grew up in Dorchester, New Brunswick with his two brothers and three sisters also referred to by Leonce as the “dirty half dozen”.
Leonce married the love of his life, Joan McDade on May 18th, 1957. They were married for 61 years until Joan died in July 2018. They first met at a church dance in Moncton. Joan was working as a registered nurse and Leonce was working in banking. Leonce was not deterred by the fact that Joan was seeing another man and he told his best friend that “I’m going to marry her someday”. A few years after their meeting, both Leonce and Joan moved to Montreal where they became reacquainted. After 5 dates, Leonce asked Joan to marry him and the rest is history.
They had five children: Alban (Sheila) Gallant of Sooke BC, Judy (Donnie) MacNevin of DeSable, PEI, Dorothy (Dale)Spence of Halifax, NS, Ted (Mirna) Gallant of Fredericton, NB and Ann (Gordon)Ramsay of Stratford, PEI as well as 12 grandchildren and four great grandchildren. Leonce is survived by two of his sisters Lauriel Richard of Moncton, NB and Carol Carroll of Ottawa, Ontario. Leonce is predeceased by his two brothers Alban and Raymond Gallant and his sister Katherine Saulnier.
Leonce was a dreamer and knew how to laugh and appreciate what he had. He embraced his Catholic faith and raised his five children to believe in his many ideals. Leonces’ legacy was his family. He passed on his wisdom to each of his five children in a unique way. For Ann, the youngest, he was her best buddy and he was the standard for all men…not perfect and taught her what true love was all about… even as a Montreal Canadiens fan. For Ted, he taught him the how to forgive and that family is everything. For Dorothy, he taught her to dream big and that life is an adventure. For Judy, he taught her the importance of civic duty and the love of politics…especially Liberals. For Alban, he taught him how to overcome challenges and to believe in himself.
As expressions of sympathy in Leonce’s memory, donations may be made to a charity of one’s choice. Messages of condolence for the family can be sent through the funeral home website at www.bellsmeadows.com
A graveside service will be held at St. Mary's Catholic Cemetery on Saturday, May 28, 2022 at 11:00 AM.
Funeral arrangements are under the care of Bell’s Funeral Home, 651 King George Highway, Miramichi, NB. E1V 1N9 Telephone: 622-3600
A tradition of service since 1922.