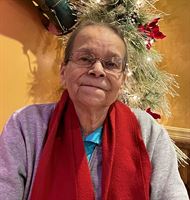 Marion Theresa Joe of Esgenoôpetitj, NB, wife of the late Stanley Joe, passed away at the Miramichi Regional Hospital on Friday, December 24, 2021 at the age of 72. Born in Miramichi, NB, she was the daughter of Alexander and Anna (Dedam) Peter- Paul. Marion was the caretaker of St. Ann’s Roman Catholic Church, Esgenoôpetitj, she was an Indian Residential School Survivor and participated in the community honor walks.

Besides her parents and husband, Stanley, Marion is predeceased by: grandson: Neil Linklater; sisters: Darlene Dedam and Gladys Kimball and brother: Clarence Dedam.

The family will receive visitors at Marion’s home, 13 St. Ann’s Street, Esgenoôpetitj, NB, starting on Thursday, December 30, 2021 after 4 PM and again on Friday, December 31, 2021. Mass of Christian Burial will be celebrated from St. Ann’s Roman Catholic Church on Saturday at 2 PM with Father Godwin Kalu officiating. Burial will take place at a later date.

Due to family allergies, the family request that flowers be artificial or in lieu of flowers in Marion’s memory, donations may be made to St. Ann’s Roman Catholic Church. Messages of condolences can be sent through our website: www.bellsmeadows.com

Please note: All Covid-19 protocols will be followed for both visitation and mass.