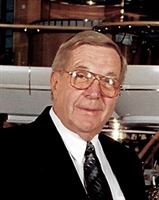 It is with great sadness that we announce the passing of Edward Frederick Matchett, husband of Lois (Hanley) Matchett on December 19, 2021 at Bridgeview Hall, Miramichi, 9 days short of his 89th birthday.
He is lovingly remembered by his wife of 69 years and their children Terry (Dawn), David (Maureen), Heather Jardine (Grant), Dale and Daryl (Kathleen). He is also survived by his beloved grandchildren, Stephanie (Chad), Deanna (Andy), Melissa, Jeff, Jamie (Natalie), Brad (Alison), Madison, Alexis, Jennifer, Laura and great grandchildren Cora, Evie, Margot and Harry as well as many nieces and nephews. Edward was predeceased by his sons Paul, Kevin and Kenny and daughter-in-law Anna.
Dad was the youngest of 14 children and was the last surviving child of James and Mary (Wedden) Matchett of Curventon, NB.
He enjoyed a very fulfilling 40 year career with the New Brunswick Telephone Company, and upon his retirement in 1991, the wonderful fellowship of the Douglastown Friendship Club and the Telephone Pioneers.
We will remember dad for his unwavering support to all of us throughout the years as well as his dedicated support to so many different community organizations.
Dad could build or fix anything whether structural, mechanical or electrical and so generously gave his time and talents to help others needing these skills. He loved sailing and gave back to the sport through his leadership on the Canadian Power Squadron for which he was awarded a life membership.
He had a deep respect for those who fought in the Second World War, and a special interest in the airman who trained at the former Canadian Forces Base, Chatham. When the base closed he made it his mission to build a memorial to the base, its aircraft and the airman who trained there and served our country. It was important to him that their sacrifices not be forgotten. That memorial is on display at the Golden Hawk Center.
Dad dealt with Alzheimer ’s disease with courage, grace and dignity. We would like to extend our thanks to the staff of Bridgeview Hall for their compassionate palliative care.
He was a member of St. Samuel’s Roman Catholic Church, Douglastown.
At the family’s request there will be no visitation. Mass of Christian Burial will be celebrated from St. Samuel's Roman Catholic Church, Douglastown on Monday, July 11, 2022 at 11 AM with Father Godwin Kalu officiating. Burial will follow in the church cemetery.
In Edward’s memory, donations may be made to the Alzheimer’s Society or to a memorial of one’s choice. Messages of condolence can be sent through our website: www.bellsmeadows.com
Funeral arrangements are under the care of Bell’s Funeral Home, 651 King George Highway, Miramichi, NB. Telephone: 506-622-3600