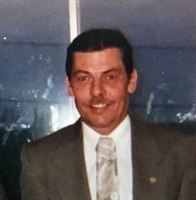 With broken hearts, the family of Stephen (Steve) David Manderson announce his passing on Thursday, September 16, 2021. He was 72.

Originally from Loggieville, he was the son of the late Blair and Rita (MacLean) Manderson. Steve spent his early years in Loggieville and Millerton before moving to Fredericton. He had a long and successful career as a Heavy Equipment/Diesel Mechanic with many years spent at Mack Maritime. He was a man deeply devoted to his faith and had a special kindness in his heart.

Visitation was held at Bell’s Funeral Home on Monday, September 20, 2021 from 6-8 PM. Mass of Christian Burial was celebrated from St. Andrew’s Roman Catholic Church, Loggieville on Tuesday at 11 AM with Father Antonio Reyes officiating. Burial followed in the church cemetery.

In Stephen’s memory, donations may be made to Power for Pets or a charity of the donor’s choice. Messages of Condolence can be sent through our website: www.bellsmeadows.com