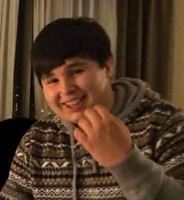 Neil is of Mi’Kmaq (Esgenoôpetitj, NB) and Cree (Moosonee, ON) descent. He passed away on March 19th, 2021.
Born in Miramichi, Neil is survived by his mother: Genevieve (Joe) and father David Linklater. Neil has three brothers: David Jr., Dylan and Joel Linklater as well as one foster brother: Kayden Lambert. He is also survived by maternal grandmother: Marion Joe; three aunts: Mary Lena Sylliboy (Robert), Beverly Wilmot (Owen) and Helen Joe; along with seven cousins and his Godchild: Reagan Somerville, all of Esgenoôpetitj, NB. Neil is also survived by six uncles: Alex Sr., Robert, Andrew, Allen, Samuel, and Johnny Linklater and on aunt: Sophia Dumoulind , along with thirty two cousins and many second cousins.
Neil is predeceased by maternal grandfather: Stanley Joe; paternal grandparents: Joel and Josephine Linklater as well as one aunt: Minnie Linklater.
Neil was a student at Oulton College in Moncton, taking Policing + Corrections Foundations. His goal was to be a guard and eventually return home to work with youth. Neil was a multi-sport athlete, mentor and referee. Neil stated in NAIG ’17 that “sport is important because it teaches you to be a better person”. “That is something you can carry with you for the rest of your life”.
Visitation will take place at 13 St. Ann’s Street, Esgenoôpetitj, NB on Thursday, March 25th after 4 PM and again on Friday, March 26th. Mass of Christian Burial will be celebrated at St. Ann’s Roman Catholic Church, Esgenoôpetitj, NB on Saturday, March 27th at 11 AM with Father Peter Aloo, SMMM officiating.
Interment will take place in St. Ann’s Roman Catholic Cemetery, later in the spring.
As expressions of sympathy, in Neil’s memory, donations may be made to a charity of one’s choice.
Funeral arrangements are under the direction of Bell’s Funeral Home, 651 King George Highway, Miramichi, NB, E1V 1N9. Telephone: 622-3600. Messages of condolence as well as donations may be made on our website: www.bellsmeadows.com.
A tradition of service to the families of the Miramichi and surrounding communities since 1922.