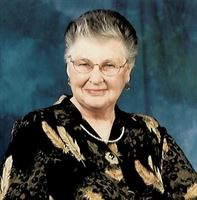 Rolla Mae Waye of Losier Hall, and formerly of Wayerton, NB, wife of the late Lloyd Waye, passed away at Losier Hall on Sunday, March 21, 2021 at the age of 88. Born in Newcastle, NB, she is the daughter of the late Byron and Evelyn (McNeill) Ashton.

Rolla was employed with Estey’s Fish and Chips. She was a member of Wesley United Church, Trout Brook, where she served with the churches Ladies Aid group.

Besides her parents, and her husband, Lloyd, she is predeceased by daughter in law: Ann.

Due to COVID-19, funeral service will take place at a later time to be announced.

As expressions of sympathy, in Rolla’s memory donations may be made to the Wesley United Church Cemetery, Trout Brook. Messages of condolence for the family can be sent through the funeral Home website at www.bellsmeadows.com