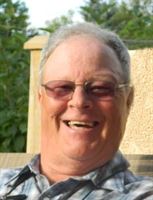 Robert Wallace Stewart, of Bay du Vin Beach, NB (formerly of the O’Keefe Rd.), passed away on Saturday, January 9th, 2021 at the age of 70. Born on March 6, 1950, he was the son of the late Patrick Grattan and Myrtle Gertrude (Blake) Stewart. He will be dearly missed by his wife of 48 years, Jill (Tracy-Gould) Stewart, his daughter Nada (Jaret) Guimond and son Heath (Jill) Stewart, and his 4 grandchildren, whom he adored: Jena, Brant, Dru and Annie.
Loving brother to the late Adam “Skip” and widow Jackie Stewart, Patrick and wife Sheila Stewart, and twin Richard and wife Neenie Stewart. Robert was predeceased by his nephew Jason, and leaves behind several nephews and nieces, all of whom had a special place in his heart.
Robert was a loving husband, father, grandfather, coach, educator and true community leader. After graduating from UNB, he began his teaching career at MVHS, where he taught mathematics for 30 years. Robert loved all things math and was a stickler for knowing your math facts! He relied on his trusty “blue book” for borrowing numbers and he loved analyzing sports standings and statistics.
His coaching career started around the time he became a teacher, with the high school baseball and hockey teams, then expanded to include many community baseball and hockey teams. Notably, Coach Stewart led teams to baseball NB provincial gold medals in every age category in NB. He loved to tell the story of his high school hockey team winning provincial gold under his leadership. Robert loved coaching and mentoring young athletes, in sport and in life. The relationships formed, and the giving aspects of coaching were what he cherished most. His dedication to sport in Miramichi was honoured in 2018 with his induction into the Miramichi Sports Wall of Fame, as a Builder.
Starting as a young lad at the family table, Robert loved the challenge of playing bridge. He was an avid player for many years, and became a Life Master. Robert took pride in his Scottish heritage and was a member of the Highland Society of NB at Miramichi since 1982.
Upon retiring from teaching and coaching, Robert and Jill moved to their cottage in Bay du Vin, where he loved to host a good lobster boil. Robert spent retirement following his grandchildren in all their extra-curricular activities, where he continued to mentor young athletes and coaches. Prior to his illness, Robert loved cooking for, serving and connecting at the Hope Café. Winters were spent in Florida with wife Jill and his brother-in-law Bobby and his wife Yvonne. Always ready to tell a good story, Robert most enjoyed a good laugh and connecting with others.
Go Leafs GO, for the extra point!
Due to Covid-19 restrictions, only a private service for the family will be held at this time. Interment will be in Moorefield Cemetery after Covid restrictions are lifted and will be followed by a celebration of life event for all to attend.
As expressions of sympathy, in Roberts’s memory, donations may be made to: the “Pulamoo Alumni Fund” by e-tansfer: or cheque made out to Pulamoo Alumni Fund, in memory of Robert Stewart or to the Moorefield Cemetery, Millbank, NB.
Messages of condolence can be sent through the funeral home website at www.bellsmeadows.com
Funeral arrangements are under the care of Bell’s Funeral Home, 651 King George Highway, Miramichi, NB E1V 1N9. Telephone: 622-3600
A tradition of service to the families of the Miramichi and surrounding communities since 1922.