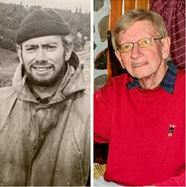 Mr. Andrew (Drew) William Rogers Dolan passed away peacefully at Miramichi Regional Hospital on Saturday, July 25th, 2020 at the age of 84.
He is survived by his wife Catherine (Kay) Menzies Dolan of Nelson-Miramichi, two daughters, Hilary Watt of Douglastown and Cara (Leighton) Taylor of Strathadam, and two grandchildren, Sydney Watt and Matt Taylor.
Born in Chatham, New Brunswick, he was the only child of Clare and Agnes (McCabe) Dolan, of Nelson-Miramichi, NB.
Drew graduated from St. Thomas College in Chatham, NB. His education did not end after his high school graduation. He was educated at: St. Francis Xavier University, UNB Fredericton, and NBCC Moncton (Teacher’s Training and Machinist Technology).
On his summers off from St. Francis Xavier University, he would work in isolation in Labrador. He also attended the Moncton Flight School and achieved his solo pilot license. His education eventually led him to a lifelong career in the construction industry. His career included numerous construction projects, including: Acadia Forest Products, Repap’s A1 and A2 Paper Machines, Point Lepreau Generating Station, NB Power Millbank, Belledune Wharf, Frasers Mill in Atholville, and Saint John Refinery just to name a few. He loved his career in construction and loved being able to see something being built from the ground up.
Drew loved his community of Nelson-Miramichi. He was a member of the Nelson Softball Association and the Cemetery Committee at St. Patrick’s Church. He and his wife Kay were vendors at many local Miramichi craft sales over the years, including both the Chatham and Newcastle Farmers Markets.
Drew loved meeting new people and hearing about the places they came from, and the stories they would tell. He would strike up a conversation with anyone he would meet; over the years he formed some wonderful friendships with people from near and far. He always had a story to tell, or useful information to pass on to anyone he would speak to (or to anyone that would listen!).
His hobbies were many - model airplanes and tall ships, remodeling antique engines, construction of stone fireplaces, restoration of gravestones, musket shooting, water skiing in his younger years, and handcrafting stone jewelry, clocks and bookends. He was always busy with a task, hobby, or project… or thinking of a new one. He was gifted with an inquiring mind, and was always looking for a new challenge.
There are many things that made Drew who he was. He loved his waterfront home and the views of the Miramichi River. Whether he had a speedboat, rowboat, or his handmade peddle boat, he enjoyed the river and boating over to Beaubears Island. He thrived in the summer heat; on the hottest part of the day he would be doing outside work, or mowing the lawn. He loved to be outside, and he enjoyed his years of having a garden to tend to. Drew loved his sweets, and was prone to pouring a glass of Pepsi first thing in the morning. He was an instigator with his daughters, and loved to annoy or antagonize them, especially first thing in the morning knowing they would be cranky. Over the 54 years that Drew and his wife Kay were married, they cherished their home time with each other. He always loved to watch the nightly news, enjoy a beer or two, have a coffee and a chat with friends at Tim Hortons, and he also had a big heart for cats and dogs - he was always known to never turn away a stray. Drew was proud of many things, including his small family, his Irish heritage, his many pets, and his St. F. X. ring - it never left his finger.
At the family’s request, there is no visitation. A private family graveside service will be held at St. Patrick’s Roman Catholic Church at a later date.
The family wishes to thank the staff at the former Mount St. Joseph Nursing Home and Losier Hall/Gorman Court for the wonderful care of Drew over the past five years. A sincere thank-you to the staff at Miramichi Regional Hospital ER and Palliative Care Unit.
As an expression of sympathy, donations may be made to Miramichi Branch SPCA, or to a charity of one's choice.
Funeral arrangements are entrusted to Bell’s Funeral Home, 651 King George Highway, Miramichi, New Brunswick, E1V1N9.
A tradition of service to the families of the Miramichi and surrounding communities since 1922.