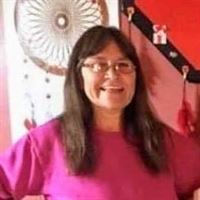 Mary “Cerena” (Dedam) Richards of Esgenoôpetitj, NB, wife of Raymond Mitchell, passed away at The Moncton Hospital on Monday, July 13, 2020 at the age of 64. Born in Miramichi, NB, she was the daughter of the late Noel and Marion (Somerville) Dedam.

Cerena was a homemaker. She worked as an education assistant as well as beautification in Esgenoôpetitj.

Visitation will be held at her residence 611 Micmac Road, Esgenoôpetitj on Thursday, July 16 after 2:00 PM and again on Friday, July 17.

Mass of Christian Burial will be celebrated from St. Ann’s Catholic Church, Esgenoôpetitj on Saturday, July 18, 2020 at 1:00 PM with Father Rodrigo Tabilona officiating. Burial will follow in the church cemetery.

As expressions of sympathy, in Cerena’s memory donations can be made to the Canadian Cancer Society. Messages of condolence can be sent through our website at www.bellsmeadows.com