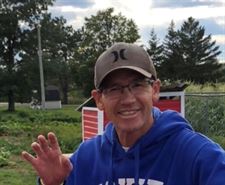 The death of Rodney Gerald Levi, occurred on Friday, June 12, 2020 at the age of 48. Born in Miramichi, NB he is the son of Mary Ann Francis and the late Eugene Levi. The best way to describe Rodney was an ambassador of the saying “live, love and laugh.” Known to many as “Buckanee,” Rodney was loved by all and family was very important to him. He was a father and loved his children deeply and was especially close to his mother and siblings. He had many nieces and nephews who all make up a tight knit family. Anyone who knew Rodney knew he had a passion for ball and fishing – at the age of 10 he would show up to the Red Bank Warriors practices and help flag the balls. When fishing, there wasn’t a part of the river he didn’t know. There isn’t one household in Metepenagiag who Rodney did not visit or help. Whether in his own community or his second home of Elsipogtog, Rodney was always volunteering and lending a helping hand. He would often be shovelling or mowing lawns for anyone in need. His laugh and smile were contagious, and he loved his community as if they were his family too. Rodney will be greatly missed by his family, by his friends, and by his community.

Besides his father: Eugene, Rodney is predeceased by: an infant sister: Mary.

The family has asked that donations be made to a gofundme page set up in Rodney’s memory.

“Those from Zone 5 wishing to send condolences are encouraged to send prayers, write on Rodney’s Facebook wall, and organize a Healing Walk in your communities on Friday at 2:00 p.m. in a show of support for the family”