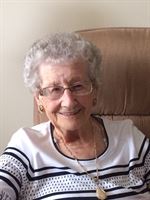 
We are saddened to announce the passing of Maria Ann Nickerson who died peacefully on June 4 at the Miramichi Regional Hospital at the age of 94....one month short of her 95th birthday.

Born in Miramichi, Maria was the daughter of the late Clifford and Addie (McMahon) Hubbard. Maria was a devoted and caring person with her family and friends. She was a very active lady who had a zest for life, she loved to golf (even achieving a “hole in one”), an avid card player playing competitive bridge into her 90s, Auction 45 and Newfie Bingo, a die hard Blue Jays fan and loved watching curling and figure skating, an awesome cook renowned for her famous Scotch cakes, loved to travel, and did a lot of trailering with Nick and was a phenomenal seamstress and a volunteer church worker at St. Mary’s Roman Catholic Parish.

Maria is predeceased by her parents: Clifford and Addie (McMahon) Hubbard; husbands: Clarence Underhill (died 1968) and Marshall (Nick ) Nickerson (died 1985); brothers: Harry and Buddy; sisters: Rose and Margaret and step son: Royden Nickerson.
The family extends its gratitude to the doctors, nurses and health-care workers at both the Miramichi Regional Hospital and Losier Hall, and the care-givers from KRT. We also thank Dr. Roy Cole and Dr. John Henderson for the care and kindness they gave to our mother over the years.
Due to Covid-19 there will be no funeral. The family will hold a celebration of Maria’s life at a later date.
As expressions of sympathy, in Maria’s memory, donations may be made to a charity of one’s choice.
Funeral arrangements are under the direction of Bell’s Funeral Home, 651 King George Highway, Miramichi, NB, E1V 1N9. Telephone: 622-3600. Messages of condolence as well as donations may be made on our website: www.bellsmeadows.com
A tradition of service to the families of the Miramichi and surrounding communities since 1922.