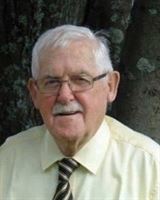 Our beloved Matthew (“Sonny”) Reilly was taken to heaven on May 22, 2020 at Miramichi Regional Hospital. Matt was almost 90 years old at time of his death.
Matt was born in Lanark Scotland and moved to Canada in 1952 with a contract for the mining industry. His path landed him in Sault Ste. Marie, Ontario where he met the love of his life and wife of nearly 64 years – Patricia (Brown) Reilly. In Sault Ste. Marie, he worked his way up at Abitibi-Price to become Papermill Superintendent. Changes led to a move out east to Miramichi, New Brunswick, where his expertise was sought for the development and training for Repap Paper. Matt was a mentor to many, and was often called on by his friends for his gift of problem-solving and handyman skills. Matt and Pat retired in the Miramichi. During retirement Matt found a passion for woodworking and spent many hours building projects for family and friends. Together Matt and Pat enjoyed many years of travel, golf, curling, visits with family and friends.
Matt was natural born leader and led many groups over the years from kid’s school PTA; President for Papermakers Local 133 in Sault Ste. Marie, Ontario; President of Miramichi Golf Club and for many years their Governor; and President of Curling Club in Newcastle. Like a true Scotsman, Matt enjoyed a good party of laughter, music, drinking, storytelling, jokes and dancing. He would want us all to celebrate his life and all the wonderful influences he had on many whose lives he has touched over the years.
Matt is survived by his beloved wife Patricia. He was a devoted father to his four children: Catherine (& Andy) in Laurel, Maryland; Tracey (& Jerry) in Hamilton, Ontario; Sean (& Tamara) in Victoria, BC: Tricia (& Ian) in Saint John, NB. He also was an adored “Papa” for his 9 grandchildren: Matthew, Chelsea (Catherine & former/late husband Joel Miller); Reilly, Braedon (Tracey & Jerry Ashford); Grace, Aidan (Sean & Tamara Reilly); Ryan, Jared and Quinn (Tricia & Ian Cameron).
Preceding Matt’s death are his siblings: Grace, Elizabeth, Francis, Catherine, and William. Survived by his remaining brother Brian Reilly in Lanark, Scotland.
Matt has been a loving uncle to many nieces and nephews spanning two countries.
Thanks to the Miramichi Regional Hospital 2West and Palliative Care Units for all the care and support to Matthew and family during his last days. Special thanks to Dr. Slorach and the Palliative Team.
Due to Covid-19, funeral arrangements will be announced at a later time.
For those desiring, memorial donations may be made in his memory to The Salvation Army or charity of your choice.
Funeral arrangements are under the direction of Bell’s Funeral Home, 651 King George Highway, Miramichi, NB. Telephone: 622-3600. Messages of condolence as well as donations may be made on our website: www.bellsmeadows.com