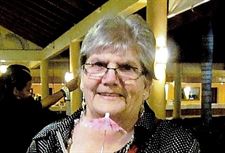 The death of Joan Marilyn (Fitzpatrick) French wife of the late Walter “Neville” French of Miramichi, NB, occurred on Sunday, March 8, 2020 at the Miramichi Regional Hospital at the age of 79. Born in Nelson, NB, she was the daughter of the late Moore and Edna (Carrier) Fitzpatrick. Joan worked at Kmart as a greeter and also at Steadman’s as a cashier. Joan was involved with her church, St. Andrew’s Anglican Church, Newcastle including being involved with the Church Choir; she was secretary of the ACW for 15 years and the Ladies Guild. She also attended Bible Study and was a great supporter of the church suppers. She loved to laugh, travel, play cards and was an avid reader. Joan was very involved in Figure Skating for over 35 years. She held various jobs including: Recording Secretary, Test Chairman, Badge Secretary, Ice Show Manager and any other jobs they need done. She was also a Primary judge for many years. She was recognized by Skate Canada for 25 years of volunteering.
Joan is survived by: one son: Gordie (Gail) of Miramichi, NB; grandson: Brandon of Miramichi, NB; one great grandson: Emerson; one half- sister: Connie Simms-Summers of Tiverton, ON. Joan will forever be in the heart of her special friend, Linda Ingraham and will be fondly remembered as “Grammie Joan” to Candace Ingraham, Whitney Ingraham and Lindsey Hudson, and as “Great Grammie Joan” to Ellie and Jasper.
Besides her parents and husband: Neville, Joan is predeceased by: one brother: Kenny.
The family will receive visitors at Bell’s Funeral Home, on Wednesday, March 11, 2020 from 7-9 PM. The Funeral Service will be held from the Sterling Bell Memorial Chapel on Thursday, March 12, 2020 at 11:00 AM with Rev. Thomas Nisbett officiating.
Burial will take place in the Miramichi Cemetery later in the spring.
In Joan’s memory, donations may be made to the Cancer Society, Heart & Stroke Foundation or the Diabetic Association.
Funeral arrangements are under the care of Bell’s Funeral Home, 651 King George Highway, Miramichi, NB. Telephone: 506-622-3600.
A tradition of service to the families of the Miramichi and surrounding communities since 1922.