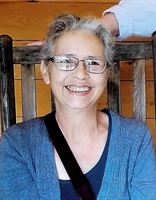 The death of Mary Linda Paul wife of the late Fenton Somerville of Esgenoôpetitj, NB occurred on Thursday, December 12, 2019 at the Miramichi Regional Hospital at the age of 55. Born in Newcastle, NB, she was the daughter of the late Lionel and Irene (Barnaby) Paul. Linda was a Drug and Alcohol Counselor for over 15 Years.
Linda is survived by: two daughters: Stacy Paul of Fredericton, NB; Charlene Paul of Esgenoôpetitj, NB; one son: Shaun Paul of Esgenoôpetitj, NB; one sister: Joan Paul (Andrew Power) of Fredericton, NB; Morris Paul of Esgenoôpetitj, NB; Lionel “Leon” Paul (Tania) of Oak Point, NB; grandchildren: Sophie, Emma, Hayden, Mikayla, Kirk, Dax, Lionel, Harmony, Silas, Abby, Lonnie, Brianna and Brody and several nieces and nephews.
Besides her parent and husband, Linda is predeceased by: three brothers: Galen, Dalen and Brian Paul and one sister: Loriann.
The family will receive visitors at Linda’s home, 79 Algonquin Road, Esgenoôpetitj, NB; starting on Sunday after 2 PM and again on Monday. Mass of Christian Burial will be celebrated St. Ann’s Roman Catholic Church on Tuesday, December 17, 2019 at 11 AM with Father John Fraser officiating. Burial will take place in the church cemetery later in the spring.
In Linda’s memory, donations may be made to the Canadian Cancer Society or messages of condolences can be sent through www.bellsmeadows.com
Funeral arrangements are under the care of Bell’s Funeral Home, 651 King George Highway, Miramichi, NB. Telephone: 506-622-3600.
A tradition of service to the families of Miramichi and surrounding communities since 1922.