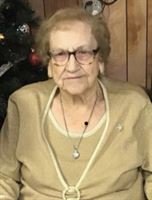 M. Lena McCrae of Shannex – Losier Hall and formerly of Newcastle, NB, wife of the late William “Bill” McCrae passed away at her residence on Saturday, November 16, 2019 at the age of 96. Born in Neguac, NB, she was the daughter of the late Bartholomew “Bertie” and Esther (Savoie) LeBouthlier.

Lena worked for the Canadian Red Cross as a Personal Support Worker. She was a member of the Miramichi Seniors Club, an avid bingo player and loved knitting, sewing, and crocheting. She loved cooking meals for all the family gatherings.

Besides her parents: Berite and Esther, and husband Bill, Lena is predeceased by one son: Ronnie McCrae and two infant children; one grandson: Gordie Butler, one brother: Emile LeBouthlier, and one sister: Alexina LeBouthlier.

At Lena’s request there will be no visitation or funeral service. A graveside service will be held at St. Mary’s Roman Catholic Church, Miramichi, later in the spring.

As expressions of sympathy in Lena’s memory, doantaions can be made to a charity of the donor’s choice. Messages of condolence can be made through our website at www.bellsmeadows.com