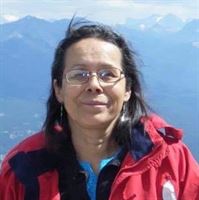 Gladys (Dedam) Kimball of Esgenoôpetitj, NB, wife of Raymond Kimball, passed away at the Miramichi Regional Hospital on Sunday, October 27, 2019 at the age of 67. Born in Chatham, NB, she was the daughter of the late Alexander Peter-Paul and Mary Anna Dedam.

Gladys was a homemaker. She was a residential school survivor, Shubenacadie, NS. Gladys was a member of St. Ann’s Roman Catholic Church, as well as a church choir member.

Besides her parents, Gladys is predeceased two brothers: Clarence and John Dedam, and one sister: Darlene Dedam.

Visitation will be held from 2981 Peters Road, Esgenoôpetitj on Thursday, October 31st after 2:00 PM and again on Friday, November 1st. Mass of Christian Burial will be celebrated on Saturday, November 2nd, 2019 from St. Ann’s Roman Catholic Church, Esgenoôpetitj, NB at 11:00 AM with Father Rodrigo Tabilona officiating. Interment will follow in St. Ann’s Roman Catholic Church Cemetery.

As expressions of sympathy in Gladys’ memory donations can be made to St. Ann’s Roman Catholic Church. Messages of condolence can be sent to our website at www.bellsmeadows.com