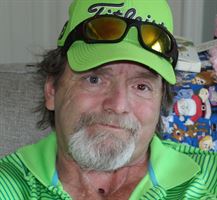 The death of Mr. Derrick John Muzerall husband of Kim (Estey) Muzerall of Williamstown, NB, occurred on Thursday, October 10, 2019 at his residence at the age of 56. Born in Newcastle, NB, he was the son of the late Leo and Margaret (Chambers) Muzerall. Derrick was a member of the Miramichi Golf and Country Club as well as a sport enthusiast and avid guitar player and singer.
Besides his wife Kim, Derrick is survived by: two daughters: Sarah Sherrard (Lucas) of South Esk, NB; Molly Muzerall at home; three sisters: Barbara Muzerall of Belleville, ON; Elizabeth Cross of Saint John, NB; Janet Jardine of Miramichi, NB; two brothers: Brian (Linda) of Miramichi, NB; Donald (Maria) of East Gwilliambury, ON; one granddaughter: Jillian and several nieces and nephews.
Besides his parents, he is predeceased by: one grandson: Samuel; three sisters: Joyce Winn, Karen and Paula Muzerall; one brother: Leo.
The family will receive visitors at Bell’s Funeral Home on Monday, October 14, 2019 from 7-9 PM and on Tuesday from 2-4 & 7-9 PM. Mass of Christian Burial will be celebrated from St. Thomas the Apostle Roman Catholic Church, Red Bank, NB on Wednesday at 11 AM with Father Dan Melanson officiating. Burial will take place in the St. Thomas the Apostle Roman Catholic Church Cemetery.
In Derrick’s memory, donations may be made to the Royal Canadian Legion Branch #10 or to a memorial of one’s choice. Messages of condolence can be sent through www.bellsmeadows.com
Funeral arrangements are under the care of Bell’s Funeral Home, 651 King George Highway, Miramichi, NB E1V 1N9. Telephone: 506-622-3600
A tradition of service to the Miramichi and surrounding communities since 1922.