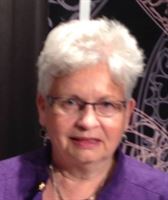 It is with great sadness the family of Judy Mullin, wife of Dale Mullin, announce her passing at the Miramichi Regional Hospital on Tuesday, August 13th, 2019 at the age of 72.
Born on May 29th, 1947, she was the first child of the late John and Margaret (Fletcher) Carroll.
For 36 years Judy taught Grade one or two in Districts 8, 10 and 16; retiring from Gretna Green in 2003.
She is survived by her husband Dale, her brothers Michael (Sheila), David (Rita), John Edward (Jackie), all of Miramichi and sister Mary, of Ottawa, ON.
Judy will be greatly missed by nieces and nephews Paul, Tracey, Chris, Matthew, Beth and great nieces and nephews Alyssa, Hunter, Travis and Carter.
Also survived by three aunts: Lalla (late Bernie) Fletcher, Mary (late Benny) Fletcher and Eleanor (late Harold) Fletcher.
Judy was an active parishioner of Saint Samuels Roman Catholic Church serving on council and other committees.
She was a member of the New Brunswick Society of Retired Teachers and the MARTA (Miramichi Area Retired Teachers Association)
Visitation will take place at Bell's Funeral Home, 651 King George Highway, Miramichi on Friday, August 16th from 2-4 and 7-9 PM. Mass of Christian Burial will take place at St. Samuel's Roman Catholic Church, Douglastown on Saturday, August 17th at 11 AM with Father John Keoughan officiating.
Interment will take place in St. Patrick’s Roman Catholic Church Cemetery, Nelson.
As expressions of sympathy, in Judy’s memory, donations may be made to the Canadian Cancer Society, Diabetic Association, Retired Teachers Scholarship Fund or a memorial of one’s choice.Please note: Retired Teachers are requested to gather prior to the funeral, Saturday, August 17th, at St. Samuel's Roman Catholic Church, 33 St. Samuel,s Street (Douglastown) Miramichi, no later than 10:30 AM, for designated seating during the service and the formation of an honour guard, afterward.
Funeral arrangements are entrusted to Bell’s Funeral Home, 651 King George Highway, Miramichi, NB, E1V 1N9. Telephone: 622-3600. Messages of condolence may be made on our website: www.bellsmeadows.com
A tradition of service to the families of the Miramichi and surrounding communities since 1922.