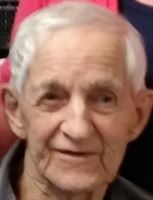 
George Ernest Edward Jagoe of Mount St. Joseph Nursing Home, formerly of Newcastle, NB husband of the late Adele (Fournier) Jagoe, passed away at his residence on Monday, August 5, 2019 at the age of 90. Born in Newcastle, NB, he was the son of the late Samuel and Hazel (Mullin) Jagoe.

George was an auto mechanic by profession, working at several garages in the area, finishing up his career with Lounsbury Automotive. He enjoyed music and always would attend the Miramichi Opry jam sessions when he could. George loved anything outdoors from tinkering with old engines in the yard, to hunting and attending to his gardens.

George is predeceased his parents, Samuel and Hazel, his wife Adele, and two brothers, Percy and Chester.

Visitation will be held at Bell’s Funeral Home, 651 King George Highway, Miramichi on Wednesday, August 7th from 1:00 to 4:00 PM. Funeral Service will be held at the Sterling Bell Memorial Chapel on Thursday, August 8, 2019 at 10:00 AM with Father Antonio Reyes officiating. Burial to follow in Saint Mary’s Roman Catholic Cemetery.

As expressions of sympathy, in George’s memory donations can be made to the Alzheimer’s Society. Messages of condolence can be sent to our website www.bellsmeadows.com