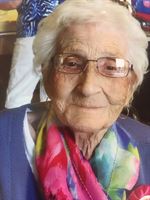 The death of Phyllis Mary (Germaine) Lannan wife of the late Andrew Lannan of Mount Saint Joseph Nursing Home and formerly of McCallum Street, Miramichi, NB, occurred on Sunday, July 21st, 2019 at her residence at the age of 93.

Born in Sturgeon Falls, ON, she was the daughter of the late David and Rose (Trudel) Germaine.

Although Phyllis considered herself a homemaker, she worked at various jobs over the years which included babysitting, taking boarders into her home and she volunteered at the Miramichi Tourism as a tour guide.

She was a great cook and well known for her many pies, she enjoyed playing cards especially bridge and loved to win, enjoyed knitting , crocheting and had a green thumb especially for her African violets, she also loved to dress up for Halloween.

If you visited Phyllis on a Thursday between 11-3 you could get your tea leaves read if you asked, the family believed she may have been part witch.

Last but not least at 91 Phyllis joined Facebook and learned how to use her own Ipad.

Phyllis was the last surviving member of her immediate family, besides her parents she was predeceased by: brothers: Henry, Alcide and Leo; sisters: Delphine, Eva and infant sisters: Lena, Clarida and Alma.

In Phyllis’ memory, donations may be made to Mount Saint Joseph Nursing Home or a memorial of one's choice would be appreciated by the family.


Messages of condolence as well as donations may be made on our website at: www.bellsmeadows.com or by email at:

A tradition of service to the families of Miramichi and the surrounding communities since 1922.