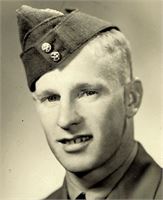 Freeman John Gallant, husband of the late Janet Eileen Gallant (Lee), of Miramichi, passed away on Saturday, April 27th, 2019, at the age of 91.

Born in Newcastle, NB, Freeman was the son of the late Joseph and Annie (Edmonds) Gallant.

Freeman Gallant CP1, CD was in peacetime service from 1951-1971, was self-employed, a hog farmer and a school bus driver.

Freeman was also on the Board of Directors of Miramichi Feeds Inc., was a member of the Fr. Dixon Council Knights of Columbus and was an active member of Saint Samuel's and Big Brothers Big Sisters and F.S.N.A Federal Superannuates National Association.

At Freeman’s request, there will be no visitation.

Mass of Christian Burial will be celebrated from Saint Samuel’s Roman Catholic Church, Douglastown on Saturday, May 4th, 2019, at 11 AM with Father Antonio Reyes officiating.

As expressions of sympathy, in Freeman’s memory, donations may be made to a memorial of one’s choice.

Messages of condolence may be made on our website: www.bellsmeadows.com.

The family would like to express their heartful thanks to the Miramichi Extra Mural Program, and in particular RNs Rose and Whitney and occupational therapist Tracy.

Special thanks to the caregivers from Unicare, most special Debbie, and his longtime caregiver and friend Patty.

The Family wants to send their gratitude to the staff for the Miramichi Regional Hospital for the compassionate care of their father in his final days.