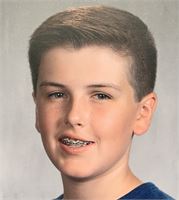 With broken hearts, the family of Avery Ernest Boyd Astle announce his tragic passing on Sunday April 21, 2019 at the age of 16.

Avery is well known for his kind heart and his beautiful smile.

He had a personality that left an impact on all who crossed his path.

He was a genuine old soul that could strike up a conversation with anyone young or old.

Always willing and ready to help, he will be missed by so many.

Avery had a passion for all things outdoors, all things automotive and anything that involved friends or family.

His summers were spent shining his car, and his winters were either spent at the rink or tearing up the trails on his snowmobile.

Anytime of the year he was up for a trip to the camp with his grandparents or families.

Avery was a grade 11 student at NSER and had applied to college with plans to become a lineman.

He had a love of hockey, and had the honour of spending this year surrounded by his closest friends on the NSER Cobras High School Hockey Team.

He was so proud to bring home the NBIAA Hockey Provincial Championship banner with his beloved teammates.

He was also so excited to be part of the NSER Drag Team this year.

He was employed by Canadian Tire which was his means to be able to buy and work on his car and other toys.

Avery will be greatly missed by anyone who knew him.

He was the kind of young man anyone would be proud of to call son, brother, grandson, nephew, cousin and friend.

Born in Miramichi New Brunswick, Avery is the son of Tyson Astle and Michelle (Allison) Astle.

Besides his parents, Avery is survived by his loving sister Alexa at home and his dog Ruby (aka stupid dog).

Avery was predeceased by his Maternal grandfather Ernest Allison and his beloved dog Petey.

The Funeral Service will be held at the Sunny Corner Arena, 32 Northwest Road, Sunny Corner, NB, on Saturday, April 27th at 11 AM with Reverend Charlene Maguire-MacKnight and Father Dan Melanson officiating.

In Avery’s memory, a donation may be made to the North & South Esk Regional High School.

Messages of condolence may be made on our website: www.bellsmeadows.com