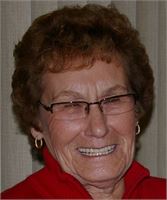 Marjorie Delano, wife of the late Leroy Delano of Miramichi, passed away at the Central NB Nursing Home, Boiestown on April 19th at the age of 90.

Born in Sevogle, Marjorie was the daughter of the late Murdock and Catherine (Mullin) Sutherland.

Marjorie was a homemaker and a member of the Order of the Eastern Star.

Visitation will be held at Bell’s Funeral Home, 651 King George Highway, Miramichi on Tuesday, April 23rd from 2-4 and 7-9 PM.

Burial will take place at the Miramichi Cemetery at a later date.

As expressions of sympathy, in Marjorie’s memory, donations may be made to the Central NB Nursing Home or the Canadian Cancer Society.

Messages of condolence may be made on our website: www.bellsmeadows.com.