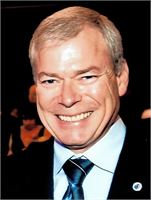 Gerald “Jed” Richard Casey passed away, March 26, 2019 at the age of 56 from complications related to diabetes.

Born in Miramichi, NB, he was the son of the late Esson and Ellien (Walsh) Casey.

Gerald "Jed" was an Aircraft Mechanic and an Instrumentation Process Control Engineer by trade, and at the time of his death was employed by the college of North Atlantic in Doha, Qatar for 6 years.

He was formerly employed with Heath Steel Mines and Brunswick Mines for 25 years.


Gerald "Jed" will forever be remembered as a great hockey player who loved the game.

He also played hockey in the Middle East League and scored the winning goal at the Desert Cup Tournament.

Gerald "Jed" also played floor hockey and was part of many championship teams with the Black Horse Tavern.

One of his proudest accomplishments was the building of his cedar log cottage in Upper Derby, NB, where he spent many nights with his wife and family by the water.

Gerald "Jed" cherished his many trips with his Fly Fishing best buddies on the Miramichi.

Burial will take place at a later time.

The family would like to give a special thank you to the College of the North Atlantic in Qatar, for the memorial in his memory with the students and staff.

As expressions of sympathy in Jed’s memory a donation may be made to the Juvenile Diabetes Research Foundation, NB Lung Association or the Miramichi SPCA.

Messages of condolences can be made online at www.bellsmeadows.com